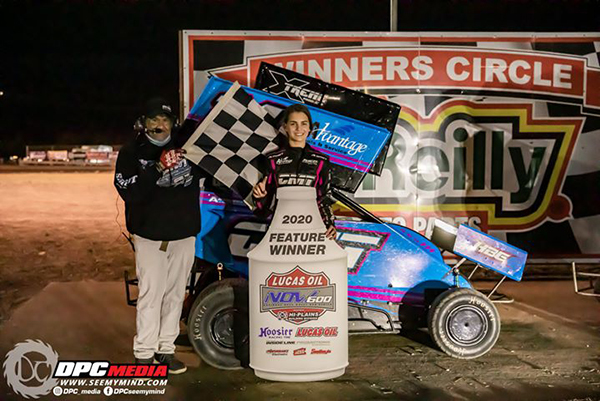 CLOVIS, CALIFORNIA (March 3, 2020) – Jade Avedisian continued her impressive start to 2020, storming to her first Lucas Oil National Open Wheel 600 Series victory on Friday night at Superbowl Speedway. The victory at Greenville, TX in the Restricted “A” Class was followed by a narrow runner-up effort on Saturday night as well.

Avedisian, winner of the 2020 Tulsa Shootout, rolled into the quarter-mile high banked dirt oval ready for competition on Friday night. Driving the #14 Driven Chassis, Avedisian won her heat race from the pole position. In the 20-lap feature, the Clovis, Calif. driver charged forward from sixth starting position to take the victory. She also competed in the Winged “A” Class where she advanced from 18th starting position for a 12th place finish in her first start in the division.

On Saturday, Avedisian again won her heat race – this time from the third position on the grid. In the feature, Avedisian drove into the lead early and looked poised for another victory. The track took rubber and tightened up, allowing eleventh starting Garrett Benson to sneak past on the final lap for his first national win as well in a great race. The Saturday feature for “A” Class might have been the biggest break through of the weekend for Avedisian. She picked up a heat race victory and then adjusted for the track conditions to drive from eighth to fourth in the feature.

Avedisian leads the NOW600 National standings in the Restricted division and plans to compete at Red Dirt Raceway in the 3rd annual Spring Nationals. The Meeker, OK quarter-mile is the sight of wing and non-wing competition with 305 Sprint Cars joining the NOW600 races this Saturday and Sunday. Scoring can be followed live on MyRacePass.

Jade’s 2020 campaign in the Golden State of California will start later this spring.