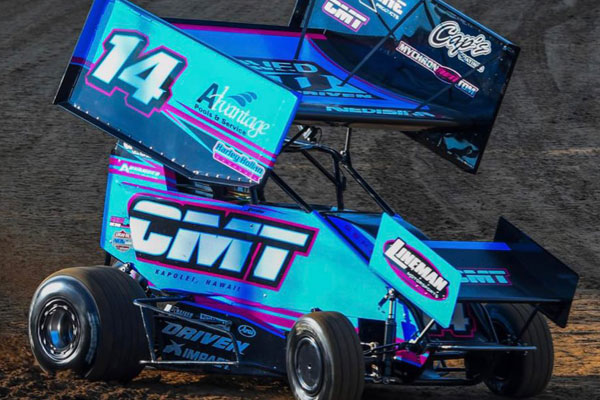 CLOVIS, CALIFORNIA (July 4, 2020) – 13 year-old Jade Avedisian of Clovis, CA will compete for $20,000 to win in tonight’s John Hinck Championship at Sweet Springs Motorsports Complex in Missouri. Avedisian, the 2020 Sooner 600 Week champion and current National Open Wheel A-Class national points leader, drives the #14J Driven Chassis and has been competing throughout the Midwest in 2020. Photo by Highfly-nphotos.com

Avedisian locked into the feature after finishing third in her A-Main on Friday night, competing against an outstanding 99 car turnout of drivers from across the nation.

In Friday’s competition, Avedisian started her heat race from ninth position but drove forward into fifth by lap six to ultimately finish fifth.

The performance placed her ninth on the starting grid for the 19-car, 12-lap qualifier race. Avedisian immediately moved forward, taking over seventh on lap three. She grabbed the fourth position on lap-11, solidly making her feature as the top-six transferred.

Heading into the second A-Main of the night, Avedisian lined up outside the fifth row for the 20-lap event. Racing against the top Outlaw and Super 600 competition in the country, Avedisian handled herself with veteran poise.

She methodically charged forward on the outside line, advancing into eighth on lap eight. She then quickly moved past one car per lap to run fourth by lap 13. The run to the front peaked with third place on lap 15, where she finished ahead of champion drivers such as Joe B. Miller.

She will start sixth in tonight’s championship feature, hoping to add to an outstanding previous 12 months in her career that has included victories at the Clay Cup, California Speedweek, Tulsa Shootout, and Mark Hagopian Memorial. She drives into tonight’s action looking for her first career Outlaw win and may do so in the highest paying event in the country.

Saturday’s John Hinck Championship sees action get started at 6pm local time with the feature event slated for approximately 11pm local time. Race fans can follow Avedisian’s night live on FastFourMedia.com where Kyler Shaw and his team will be broadcasting the entire night of racing live in Pay Per View.