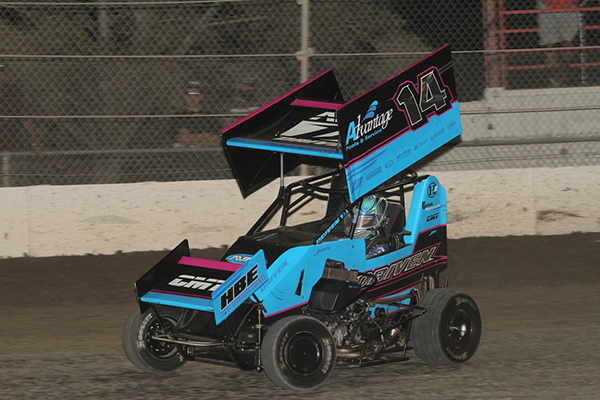 CLOVIS, CALIFORNIA (August 14, 2019) – 12 year-old Jade Avedisian picked up her seventh win of the season by taking Friday’s points race at Keller Auto Raceway in Visalia. The win was her second of the year at the speedway in Plaza Park and was followed by a top-five finish the next night at Lemoore Raceway.

With the weekend performances, Avedisian finds herself third in the standings at Keller and continues to lead the championship at Lemoore Raceway.

The Restricted competition in California throughout 2019 has been tough but Avedisian has risen to the occasion for a strong and consistent campaign.

Friday’s action saw Avedisian qualify the #14 Driven Performance chassis sixth out of the 20 Restricted entries on hand. She went on to finish third in the third heat race of the night.

The feature was a different story as Avedisian surged past points leader Gauge Garcia on lap nine. She clicked off her best lap of the feature two laps later. She maintained her advantage over Garcia through traffic and restarts the rest of the way home for a 1.180 second victory.

With the win in hand, Aved Racing moved on to Lemoore Raceway on Saturday night. Avedisian is the points leader at the speedway despite not yet visiting victory lane in 2019.

Avedisian topped an outstanding turnout of 23 entries including nearly half a dozen from Arizona, taking time trials with an 11.653 second lap. She overcame a first lap incident to charge back to fourth in her heat race and make the inversion for the feature.

Starting eighth, she quickly marched up to the third position. She was relegated to the back of the field after an incident on lap 11. Undeterred, she drove through the pack again for an outstanding fourth place finish. The finish preserved a 32-point lead in the standings with four points races to go.

Avedisian returns to the Delta Speedway presented by Financial Center Credit Union on Saturday night in Stockton, CA. She currently ranks third in the Restricted standings, just 15 points out of the lead.