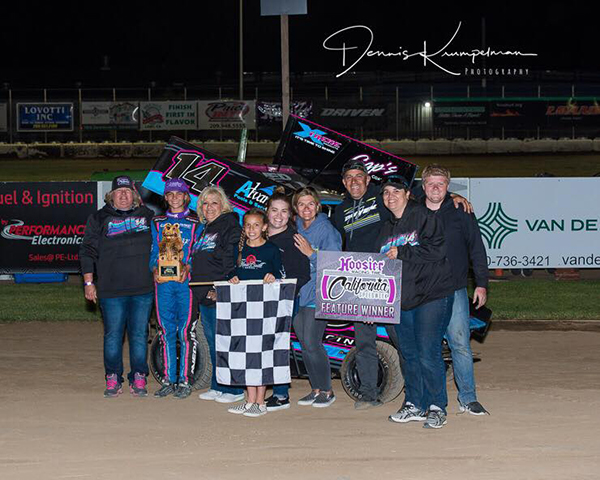 The week opened on Tuesday with 32 Restricted cars competing at Dixon Speedway. Avedisian qualified second which placed her fourth on the grid for her heat race. She started fourth and finished second, earning crucial passing points and qualifying for the top four redraw. The redraw lined her up on the outside pole. Her main event did not go in her favor, drifting back to eighth place but still a solid top-ten finish.

Delta Speedway on Wednesday was a totally different story with 33 entries at the Stockton, CA bullring. Avedisian timed in sixth quickest and charged from third to first to win her heat race. She again made the redraw and again drew the number two spot for the 25 lap main event.

Avedisian closely followed Delta points leader Logan Trevino through lapped traffic until lap 21. Trevino opened up the bottom and Avedisian pounced, driving up on the berm to nab the lead. She did not relinquish the lead over the final four laps to take her first $1000 Speedweek victory and the carved wooden bear trophy that goes with it.

The optimism was at a high as she narrowly trailed Trevino in the standings entering Friday’s race at Keller Auto Raceway at Plaza Park. She qualified fifth and finished third in the heat race to settle for fifth starting position in the feature.

She got bottled up early and fell as low as tenth before tuning up the wick. Challenging for seventh position, she went up the inside of Dalton Parreira in turn four. The pair became hooked together and went towards the front stretch guardrail. They were collected by several other cars as well with hard hits. Avedisian was uninjured but recorded a 19th position DNF.

The team worked tirelessly overnight to repair the car to give her a fighting chance at Lemoore Raceway her primary race track. She qualified 16th but won her heat race, lining her up eighth in the feature. She finished seventh in the feature to wrap up a third place finish in the points standings. Despite the incident at Plaza Park, she missed out on the championship by just 87 points out of 37 different drivers who competed.

Her season continues this Saturday night with a return to Lemoore Raceway for points race #8.

Jade would like to thank her sponsors CMT, Xtreme Products, Driven Performance, Garlock Collision, and Impact for their support.