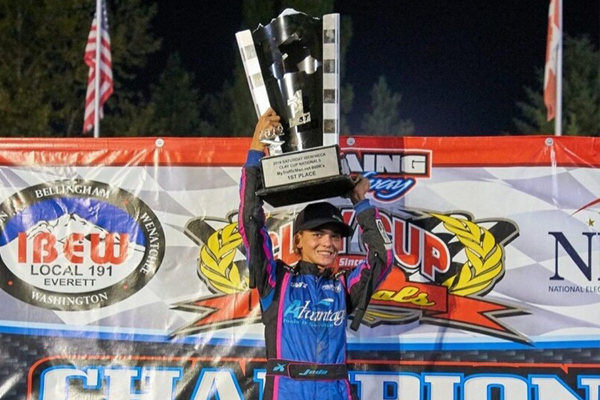 CLOVIS, CALIFORNIA (July 22, 2019) – Jade Avedisian won the largest victory of her career when she topped Saturday’s $3500-to win Restricted feature during the Clay Cup at Deming Speedway. Avedisian led the final 24 laps in the 36th running of the lucrative event in Deming, WA.

Her 2019 season has also included a main event win in the 2019 California Speedweek and the points lead at Lemoore Raceway. She also ranks third at Delta Speedway and fourth at Keller Auto Raceway at Plaza Park.

Her weekend activities leading up to the feature were strong enough to place her on the outside pole for Saturday night’s main event. She won her heat races on both Thursday and Friday and also ran 15th to third in the Friday night preliminary feature. She ranked second in Saturday’s hot laps as a harbinger of the success that would follow.

In the 30-lap championship race on Saturday night, Avedisian took over the lead on lap six. Her best lap of the feature came one lap later with clean air and an open race track ahead of her.

The 12 year-old ran the cushion and navigated lapped traffic beautifully in the fast-paced main event. She eventually built up a 3.126 advantage at the stripe for the significant victory. She received an enthusiastic response from the standing room only crowd in attendance as well.

Avedisian and her #14 Driven Performance chassis will turn their attention back to Delta Speedway on Saturday night during their Law Enforcement Appreciation Night. She will be in search of her third win of the year at the 1/7th mile dirt oval. Every Restricted feature of 2019 in Stockton has been won by Driven Chassis.