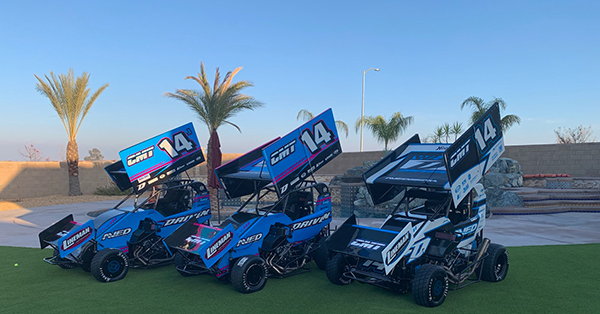 CLOVIS, CALIFORNIA (December 21, 2020) – Clovis’ Jade Avedisian and Fresno’s Jake Hagopian will team up with each in search of their second career Golden Drillers, as they aim for the 36th Tulsa Shootout in Tulsa, Oklahoma. Avedisian won the Tulsa Shootout in the Restricted division in 2020 while Hagopian is the purveyor of the Driven Performance D1 Chassis and winner of the 2019 A-Class in Tulsa.

Avedisian comes into this year’s Shootout with a tremendous amount of momentum on her side. The 14-year-old will look to build off a career-defining season with entry into four divisions at Shootout. Running both Stock and Outlaw, and both Wing and Non-Wing, Avedisian will try to join 11 drivers before her who have made the feature in all four classes. Her Outlaw program will be fielded by WHR while Hagopian’s Outlaw entry is under the AVED Racing banner.

Her 2020 campaign was marked by ten victories. Avedisian’s most notable win came in July in the $20,000 to win John Hinck Championship. She added a sweep of the NOW600 A-Class and Restricted national championships and triumphed in both classes during the Sooner 600 Week. This year’s success followed a 2019 campaign with 11 victories including at the California Speedweek, Hagopian Memorial, and the Clay Cup.

All the accomplishments for Avedisian have been behind the wheel of cars built by Driven and carrying the #14. Pairing with 2018 California Speedweek champion Jake Hagopian in a trio of chassis carrying #14 will give the trip extra significance.

Practice begins on Tuesday December 29 before racing starts on the 30th. Saturday January 2nd will see the championship features for the 36th Tulsa Shootout. Each night will be broadcasted live around the world on www.FloRacing.com as well!

Learn more about Jade Avedisian at www.JadeAvedisian.com Her 2021 plans will be announced soon!